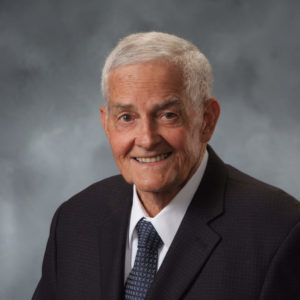 C.B. Graft is the founding member of Graft & Walraven. He first opened the practice in 1967 as a solo-practitioner serving Western Oklahoma in the areas of oil and gas, real estate and estate planning law. He now has over 50 years of experience in these areas of the law. Most recently, C.B. was one of the attorneys who successfully represented Western Oklahoma mineral owners in a class-action lawsuit against Exxon-Mobil, in which mineral owners were awarded a $30 million settlement.

A lifelong resident of Western Oklahoma, C.B. was born and raised in Putnam. He grew up helping his family with farming and ranching. In 1966, C.B. enlisted in the United States Air Force Reserves. He attended basic training at Lackland Air Force Base in San Antonio, Texas, then served out of Tinker Air Force Base until 1972. He left the Air Force as a Staff Sergeant.

C.B. is married to Tricia Graft and together they have five children. He enjoys spending time with his family, especially the grandchildren.